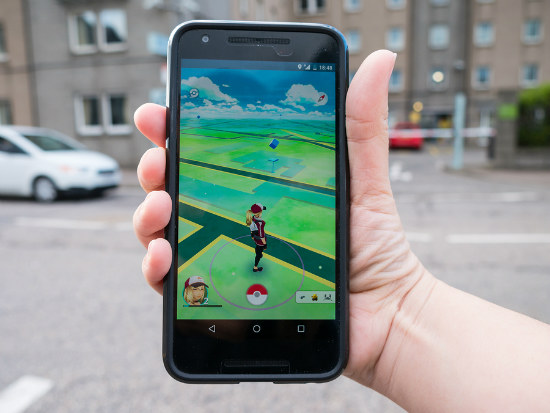 Undaunted by wind and rain, more than 200 fans of the PokemonGo game flocked to the iconic sails on Wednesday to take part in a lunchtime hunt set up by the Opera House.

The hunt, which was promoted on social media, featured 10 nearby Pokestops lighting up with “lures” to attract a variety of Pokemon creatures and the throngs of “trainers” out to catch them.

Many came prepared for the elements with raincoats and umbrellas while others went for the chase bare-headed.

Carlingford student Peyton Green, 18, and her mum bought ponchos on the spot when they realised the constant act of keeping their heads dry was impeding their Pokemon catching.

“We had umbrellas but I thought um no, that’s not gonna do because you’ve got your hand holding an umbrella, how am I supposed to do what I’ve got to do?,” she told AAP in her bright-blue poncho.

Others in the crowd made up of office-workers, families and teenagers, were more circumspect, only settling into the task once they found some dry cover under the shop awnings.

Tourists visiting the Opera House discovered the bemusing spectacle as they were forced to weave through the crowd of players, some seated on the ground to better focus on the task at hand.

Kogarah butcher Taylor McCormack, 24, had arrived at the Opera House at 10am to catch Pokemon on his day off and was surprised by the sudden influx of players.

He said chatter on the internet about the prevalence of water-type Pokemon around Circular Quay had driven his decision to go into the city prepared with a phone and pre-charged phone battery.

“So far I’ve caught a Ponytar, Golduck and a really high Starmie,” he said.

“It’s been really great, getting out and mingling with people, and having conversations about the locations of where all the Pokemon are.”

Another high-level player, 13-year-old Yoav Reuven, was walking around with his cousin, Grace and swiping at a massive iPad to capture the riches.

He and a friend had planned a day trip for Monday, when the hunt was first scheduled, and were crushed when it was rescheduled, reportedly due to US Vice President Joe Biden’s visit.

“My mum felt so bad for me that she took me out of school,” he said gleefully.

“The Squirtles keep running away from me which is really annoying but I got an Electrobuzz – I wanted him so badly and I finally got him!”

While Wednesday’s hunt was a one-off, the numbers were actually far fewer than what the Opera House saw on Monday night, where hundreds of people, taking advantage of the warm evening weather thronged the boardwalk with their phones in hand.

Since the game’s launch on July 6, hundreds have been flocking to the Opera House and Circular Quay, now Pokemon-rich hotspots.