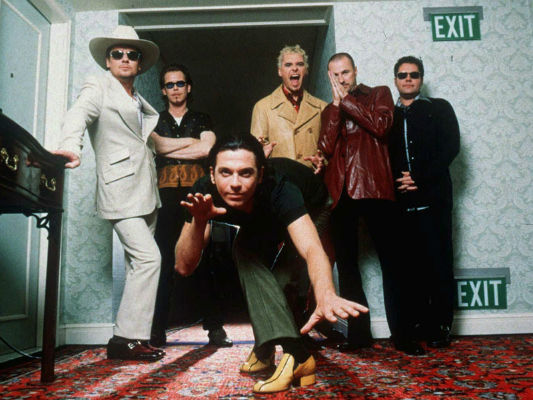 The demo tape of INXS hit Never Tear Us Apart is one of many items set to be unveiled to the public in an exhibition of the band’s archives, planned to open some time next year.

The archives, which are currently housed in a shed on band manager Chris Murphy’s rural NSW property, contain a treasure trove of items from the band’s career.

“The INXS archives exhibition will be hitting the road in the next twelve months and that’s 35 years of hidden archives that no one has ever seen,” Murphy told AAP.

Murphy discovered he had trunks full of INXS material in 2012 when he was forced to evacuate his property on the Hawkesbury River because of flood warnings.

“I’ve also got all the backstage proof sheets from Wembley, we shot all the behind the scenes at Wembley, which has never been released,” Murphy said.

The exhibition is part of a four-pronged INXS attack which includes the previously reported musical, Michael Hutchence documentary and a secret live production.

“I was thinking to myself the other day `Holy s***, what if all this ripens and I’ve got suddenly Michael the movie at the Sundance Film Festival, I’ve got New York opening with INXS the musical, I’ve got this other production I’m working on opening in Sydney and I’ve got the archives wherever it is. I could literally have this all happening within a 30-60 day period’. That’s a bit dangerous but I thought `No, I can handle it’,” he said.

“I’ve brought Universal on as a full-fledged partner because I need solid people around me while I take on, I think I’m taking on the greatest entertainment masterplan ever,” he said.

Murphy and Universal revealed they were working on a documentary of late INXS frontman Michael Hutchence’s life to be directed by Richard Lowenstein who directed many of the band’s music videos including Never Tear Us Apart.

The announcement came a week after Sydney businessman Ron Creevey told AAP he was making a documentary on Hutchence’s life, along with the release of 15 previously unheard solo tracks.

According to Murphy, he had been working on the idea of the documentary since the band and he began working together in 2009 after a 12-year hiatus.

“The Michael documentary, everyone is going to think we just came up with this yesterday but people don’t have the understanding that we’ve been working on this for six to seven years,” he said.

“No one knows what it is, I don’t even know who the man is and I don’t know what they’re all talking about. Nobody knows anything,” he said.