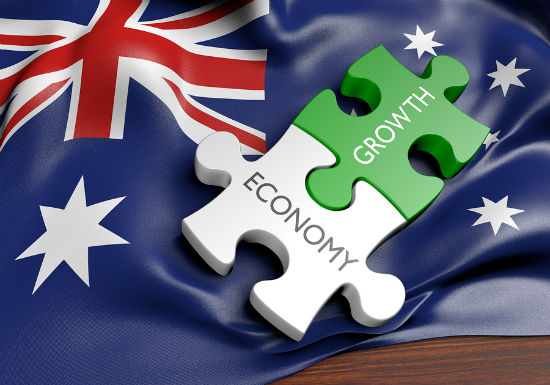 Australia is closing in on a world record for the longest period of economic growth in the modern area.

The nation’s gross domestic product (GDP) rose by 0.5 per cent in the quarter and 3.3 per cent in the year to June, the latest Australian Bureau of Statistics figures show.

That annual figure is the fastest growth in four years and crowns 25 recession-free years for the Australian economy.

UBS economists say the economy is rebalancing better than most expected after the mining boom.

“Obviously, with growth dominated by government spending and net exports but only moderate ongoing gains in consumption and housing, some will argue the economy has a soft underbelly,” the UBS team said in a note.

“But it’s precisely this versatility of drivers that has now delivered Australia 25 years of uninterrupted economic growth.”

Standing in Australia’s way for the world record is the Netherlands’ 26-year run of expansion – but just three more quarters of growth Down Under would steal the title away from the Dutch.

The main contributor to Australia’s growth in the June quarter was domestic demand, which rose 0.6 per cent, supported by ongoing rises in household and public consumption.

Even though household spending growth halved in the quarter, it still contributed to 60 per cent of GDP.

Royal Bank of Canada chief economist Su-Lin Ong was optimistic about the 2.3 per cent rise in the terms of trade and a rise in plant and equipment investment shown in Wednesday’s report.

Ms Ong said the improvement indicated those two factors should be less of a drag on the economy in the next 12 months.

However she warned that currently booming public expenditure was not sustainable in the long term.

“The residential construction upswing and rising asset prices have lent support, but this is unlikely to be the case in 2017 with the consumer (spending) starting to fade,” she said.