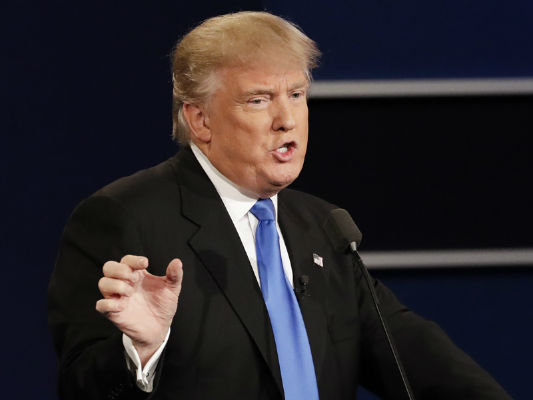 The Australian dollar could fall up to 10 per cent if US Republican candidate Donald Trump wins the US presidency in November, according to Commonwealth Bank’s currency strategists.

“We believe US bond yields and the US equity market will lift on the company tax cut, and the US dollar will surge higher,” they said.

A 10 per cent jump in the US dollar will be driven by investors chasing higher returns on their investments, which in turn could see the Aussie fall by 10 per cent to around 68.71 cents.

However, if the Democrats control the Congress, the impact on currencies would be less, the CBA’s currency strategists said.

The first US presidential debate between Mr Trump and Democratic candidate Hillary Clinton is set to take place on Monday night in the US, around 1100 Tuesday AEST.

Recent polls suggest Ms Clinton is still the favourite to win the presidency, but her lead over Mr Trump is shrinking, according to CBA, which cites FiveThirtyEight.com

If elected, Mr Trump has vowed to sharply cut income taxes to lift household and business spending, and to reduce business tax to 15 per cent from its current scaled variable rate of between 15 to 35 per cent.

“The US economy would grow at a more rapid rate given household consumption accounts for 70 per cent of US GDP (gross domestic product),” CBA’s currency strategists said.

The controversial businessman also plans to lift a raft of environmental restrictions that inhibit energy investment, to label China as a “currency manipulator”, renegotiate the North American Free Trade Agreement (NAFTA) and apply tariffs and duties to countries that cheat.

Americans will head to the polls on November 8 to elect the next president and members of the US House of Representatives and the Senate. The election results will be out a day later.